It hasn't been a great season so far. I'm basically working two jobs (although not very hard on the second one) and the weather has been downright awful. As a consequence, I didn't really get started jumping until august.

With such a late start, I'm sad to say, I only got four jumps so far this whole season. That is just terrible. But this fourth jump was an awful lotta fun...

John Stephens videoed the very simple two-way we rapidly planned on the way up. The plan was to a) hook up; and then b) separate. 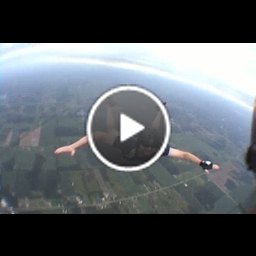 I've already gotten 11 jumps this year. I only got 6 total last year. On jump 105, Bill took video and got pictures for me.

I've been in this sport for 7 years and these are the first pictures from outerspace. Huh.

You can't tell how much I suck from the stills. Wait for the video. This jump was for a B-license requirement (the last one actually). I had to do a left turn (360°), right turn, back flip, left turn, right turn, back flip. Supposedly easy, but if you're any judge of body positions from stills, you can see that I was "all over the sky."

Eh. I technically completed the requirements and I had fun. What else is there?

Here's some misceleneous skydiving videos, a long one showing my wife's tandem and a short one apparently taken at GreatLakes Skydivers back in 2002. 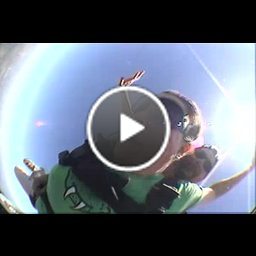 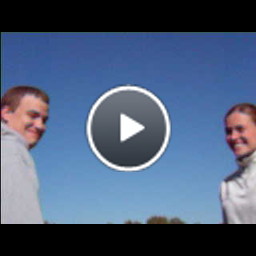 My jumplog is online. I had made a database of it, so I thought, hey, why not put it online. I'm honestly surprised how many people have told me they read this. Generally when I put things online, it's for me and nobody ever reads the things I put up. There are a few exceptions and this is one of them. I'm frequently surprised how many people claim to read my jumplog...

If you're looking to go skydiving and you're more or less in the Kalamazoo or Grand Rapids area, then you'll want to look at Skydive Plainwell. That's my home dropzone and it's where all the cool people go.

That's me on the right there, jogging along, with my colors: blue, yellow, grey, purple.

It's been a long time since I posted an update on this "blog." I figured I should say something...

Because of the fact that I'm having a baby soon (tail end of november problably), I have been mainly focusing on a project that I'd like to finish while I still have some free time. (Supposedly the free time gets completely consumed by infants.) As a result, I have not been out jumping enough this year.

If you read my jumplog, you'd think I haven't jumped at all. That's not quite right... I got six jumps in this year (essentially 0, yeah), but I failed to log them because the software I use to update the log broke a while back and I never fixed it.

I'm quite sure I'll get those entered in eventually, so if you've been waiting on pins and needles for the latest updates... well... keep waiting. But I'm sure I'll post them eventually.

Ahh, I finally graduated. The graduation jump was something of a thrill. On the ride up, I was with two first jump students. Mmm, the irony. I told one of them my secret to keeping from totally panicking. Prattle on endlessly. We chatted about freeways, how to spot the airport, the temperature, etc. She seemed to feel that climbing out was scary. Actually, she was worried about being able to hang onto the wing. I informed her that it wouldn't be difficult at all. Climbing out is surprisingly difficult. I failed to mention that... But hanging on is easy.

It reminded me of my first jump. When I tried to put my feet out, ... I panicked and hauled them back in. She did that too. :) Heh. Then we had to climb from 3500ft to 10500ft. I took a lot of deep breaths. I'm not sure, actually, if the reason I take such deep breaths on the ride up is because I'm just nervous ... or because the air is a bit thinner up there.

Heh. Some dorkus opened his canopy around 8000ft right in the spot. Since the spot is where we wanted to get out, of course, and since he was right in the way ... we had to circle for like 15 minutes while we waited for him to finally land. That was irritating. Nervous and excited about my last student jump ... we're circling endlessly. I kept trying to think of things to think about so I wouldn't overthink my exit.

I'd never done a crotch exit before. I figured if I thought about it too much, I'd do something dumb. Turns out to be true. Just what is a crotch exit? Well, let me start by first describing a poised exit. In the poised exit, the jumper sticks their left foot on that little step, their right hand on the wing strut, and their left hand on the door frame with their right foot dangling in the wind.

See where the wing strut meets the fuselage? That is known as the crotch. I wedged my right foot in there, put my left foot on the step next to the jumpmaster so I was facing backwards. Our faces were right next to eachother. [BTW, there's no homophobia in this sport. Only one jump before, two experienced jumpers were sitting next to the pilot in a position I could only call: cuddling.] I gave him a nod, that I was ready, and we rocked...

"Ready" he yelled and leaned toward me. I leaned back.

"Set" he yelled when we got all the way back.

"Go!" we yelled as we launced from the aircraft. For whatever reason -- and he had said this would be the case, he ended up 20ft or 40ft below me almost instantly. I tried to point myself at him, but I was already tipping.

Something about how I kicked off the aircraft sent my feet past my center of gravity and I ended up doing a front flip. But I was able to handle it. I stuck my arms waaaay out to the side (for stability), let it flip around and before I was oriented on the hill again, I jammed my feet way out.

I was moving towards him at a good clip! I was also about 40ft away from him -- and graduation. But I did finally make it. Hazzah. I docked, we grinned. We were at 6000ft and he was considering backing up to try for another dock, but he thought the better of it and sent me off.

On the ground, he told me that he didn't move. I covered the 40ft on my own. Because I was all tilted forward, I was dropping more than he was, so he said he had to arch a little harder to keep me from sinking under him... He also told me how to match the fall rate better. But, I did close that distance on my own. :)

Hurray! I graduated! I'm a skydiver!

Danna came out with Fred and me this weekend! That was fun. She brought her camera and we got these pictures. This one is great. The both of us dig good pictures of us and we agree that I look like a skydiver in this shot.

Here's yet another walk to the aircraft... That's me on the left (hair) and Fred on the right (clown suit). That giant suit helps him fall slower. He's got a famously fast fall rate. Note that I'm flying a giant manta 280sqft canopy. Fred's got that relatively small triathalon 210. It's still a big canopy, but looks small next to mine.

I'm not even 100% sure this is me, but I certainly think it is. The most interesting part of the shot (imho) is the "peas." It's a 30ft diameter circle of pea gravel. If you come in hard, it feels less bad in there. Unfortunately, I rarely hit the target. :) This shot (if it's actually me) is as close as I got on 9/21.

Here's a shot of Fred and I sitting around peacfully waiting for our turn in the jumpship.

This is the two of us again, but this time, putting stuff on for the flight.

These two are both from 6500 ft. I traded some linear algebra tips to get these. I'm actually hanging from the wing-strut. You can see that fairly clearly in the second image.

Here I am on the ride to altitude right before the hanging pictures.

This is my (now famous) first jump picture. The dropzone organizer, named Mary, takes your first freefall. It takes a few jumps to get to that point, so you're pretty proud of yourself when you get to it. :)

Until I get some better pics up, here's me walkin' toward my Cessna 182. :) I'm the one on the far left, with all the hair. The guy without a rig, is the pilot. I'm particularly thrilled to have that sign in the shot. It reads, skydivers boarding aircraft only beyond this point.

I was actually in the c182 at this point. I simply must get a shot of the crowded interior some day.

Ya know what else would be nice now? Some shots of me actually in the air. ;) I do have one of a landing ... low res, and it's hard to tell what's going on. Notice the wing deformation? That's cuz I'm doing a flare. I pulled my toggles all the way down to my hips, which bends the rear of the airfoil and gives you a second or two of lift... you hit the ground so soft (if it's done perfectly) that you don't normally need to take a step. BTW, it usually doesn't go quite that well. ;)

(Updates 2001/9/30) This is just another shot of me under canopy. I was injured at this point. I had a bad opening due to a bad body position. Opening while sitflying is not recommended.

This one is during a flare.

Hey! Lemme know you saw this!!